Exploring this historic warship will give you a sense of how life was like on board of a warship during World War II.

Launched in 1938, the ship was a powerful destroyer serving Great Britain during 32 years when it acquired special relevance during World War II and the Korean War.

Between 1950 and 1960, the HMS Belfast was no longer used for war purposes, but recommissioned for humanitarian actions.

The warship remained in service of Great Britain’s navy until 1965 and after being retired, it became a floating museum in 1971.

A tour of its deck

An audio guide will accompany you during the visit to its nine decks. You will be told about the historical and military events in which the warship was involved, as well as some interesting anecdotes such as the fact that it was normal to bring cats aboard the ship to control rodent plagues.

During the visit, you get to see the different parts of the ship where the sailors lived, like the cabins, the kitchen, the dental room, the sick bay, the emergency room, or the wine cellar, as well as the engine room and operations room.

The magnitude of the operations led on this ship is visible when you observe the cockpit, the captain’s cabin and the canons used to fight against the many air strikes.

A warship full of memories

You can visit practically the whole ship, and each of its decks and rooms offers fascinating stories. Although the visit is sometimes a little difficult due to the narrow passageways and steep staircases, the fact of visiting the only warship that survived the Second World War makes this visit definitely worthwhile. 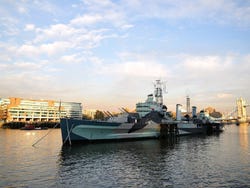 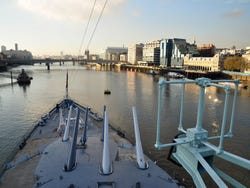 Views from the HMS Belfast deck 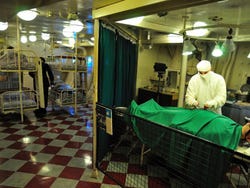 River Thames, near the Tower Bridge