The museum was founded from the private collection of Sir Richard Wallace, the last in a line of five generations of a British aristocratic family, the first four Marquesses of Hertford and Sir Richard himself the illegitimate son of the 4th Marquess.

The exhibition was opened to the public in 1900, housing a wide variety of fine and decorative arts from the fifteenth to the nineteenth century. With over 5,000 pieces of art, this sizable collection was collected by four generations of the Hertford family. The collection has remained as is and complete since the opening of the Wallace home, Hertford House, as a condition of the collection's bequest was that no object should leave the collection, even on loan.

The Wallace Collection is best known for its Sevres porcelain, its collection of French paintings and the mansion’s furniture, which is also incredibly beautiful. The Back State Room is dedicated to the splendour of the French Rococo period under King Louis XV, while the Oriental Armoury is replete with Indian arms and armour as well as artefacts from the then Ottoman Empire (modern Turkey) and the Far East.

This museum also exhibits gems such as paintings by Tiziano, Rembrandt, Rubens, Van Dyck, Velazquez and Canaletto. You will also find an impressive collection of arms and armour, medieval and renaissance sculptures, and artwork made of gold, bronze and glass throughout its 25 galleries.

The Wallace Collection is one of the best in London, not only because of the quality of the works of art, but also because of its ample variety. The mansion in itself is also worthwhile visiting.

And to top it all off, the entrance is free. 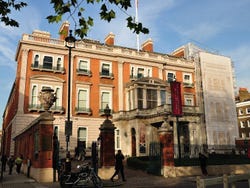 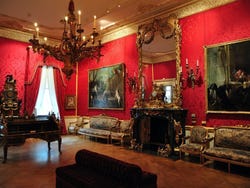 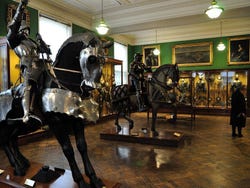 Exhibition of arms in The Wallace Collection
3See photo gallery