The museum, once known as the British Museum (Natural History) was built between 1873 and 1880 to display an important collection of skeletons, fossils and plants that had previously formed part of the British Museum. The museum’s collection grew steadily and in 1986 it absorbed the adjacent Geological Museum.

The entrance to the museum is breath-taking. In its carefully decorated hall, enormous creatures are displayed such as a diplodocus and a mastodon, originally from Chile.

The museum is composed of various collections displayed in this impressive building from the nineteenth century. We recommend visiting the following exhibitions:

If you’re travelling with children, the Natural History Museum is highly recommended, as it is extremely entertaining with plenty of things to see and do. Another positive aspect is that it is very close to the Science Museum, another favourite amongst children.

The Natural History Museum is also the setting of numerous book and films, including Paddington, which was shown in the cinemas in 2014. 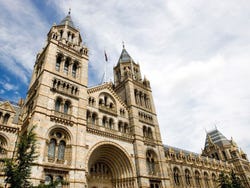 Building of the Natural History Museum 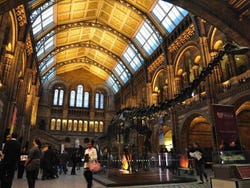 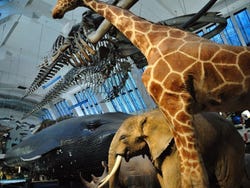