For over one thousand years, Whitehall and Westminster have been at the heart of political and religious power in England. For this reason, the areas have a large number of monuments, compared to other neighbourhoods in London. Whitehall is lined with government departments and ministries. To the north, Trafalgar Square marks the beginning of London’s West End, an area with a great nightlife.

Piccadilly Circus and St James's is the West End's main artery. During the eighteenth century this was a popular residential area among the aristocracy and also a favourite spot for shopping. The most refined part of London is still Mayfair, and Piccadilly Circus is where Soho begins.

Built at the end of the seventeenth century, it was the city's most elegant neighbourhood until the beginning of the nineteenth century. Its chilled pubs and bars are a favourite among artists and intellectuals. Nowadays, it is one of the most permissive and multicultural neighbourhoods in London, epicentre of London's gay scene, and part of the area houses the popular Chinatown.

This is one of London’s liveliest areas. Famous for its outdoor cafes, its street artists, its boutiques and market. In its centre is the Covent Garden Piazza, designed by Iñigo Jones in 1630. This was the city’s first modern square.

A must see in Covent Garden is the Piazza and the former fruit and vegetable market.

This area is where many artists and writers live, and it boasts numerous libraries. The University of London, British Museum and countless Georgian squares are also found in Bloomsbury.

Top attractions include the British Museum and Russell Square.

Holborn and Inns of Court

This area is where lawyers and journalists preferred to live. The Royal Courts of Justice and the Inns of Court are located in this district. Lincoln’s Inn, one of the four Inns of Court, was home to many world leaders. Some of its buildings date back to the fifteenth century before the Great Fire of 1666. Holborn was an important commercial district.

The City of London, also known as The City, is London’s financial district, home to the Bank of England and The Stock Exchange. This area is extremely lively during the week, but quiet on the weekend.

This area is where the Romans founded Londinium. After the Great Fire of 1666, which burnt most of the ancient city, Christopher Wren supervised the construction of 52 churches in the area that are still standing today. During the nineteenth century it was one of the most popular residential areas. However, nowadays very few people live here. The City is a mix of modern glass buildings contrasting with Georgian houses.

The top landmarks in this area include St. Paul's Cathedral,  the Tower of London and Tower Bridge.

One of the most historic parts of London, north of The City, it served as a refuge for those who were not welcome in the ancient city. During the seventeenth century the Huguenots, as well as other European and Bengal immigrants established themselves in this area and built factories, bringing their cooking and religion to London.

Here you will find one of the oldest churches in the capital, Jacobean houses, remains of the Roman wall and the only wholesale market in London.

From the Middle Ages up until the eighteenth century Southwark was a very popular borough. Outside the jurisdiction of the city, Southwark was where those who wanted to indulge in forbidden pleasures came to.  Shakespeare had his theatre company in the Globe Theatre, which has been rebuilt close to its original location. In the eighteenth and nineteenth century factories, warehouses and docks were constructed. Nowadays, Southwark is one of the liveliest neighbourhoods.

This area was badly hit during the World War II bombings. In 1951 the Festival of Britain designated the area as a place of arts and entertainment. The only building that still stands from 1951 is the Royal Festival Hall.

In South Bank you will find the London Eye.

During the reign of the Tudors the little village of Chelsea, by the river bank, became very popular. Henry VIII built a palace here that is no longer standing. Thomas More lived here, like many other artists who were very captivated by the ideal scenery of the river from Cheyne Walk. During the eighteenth century beautiful courtesans would walk in its gardens and the Chelsea Arts Club would organise scandalous dances. In the nineteenth century, it was inhabited by artists and intellectuals. Nowadays, this is an exclusive area, sometimes too expensive for artists, but it maintains its link with the artistic world with numerous art galleries and antique stores.

South Kensington and Knightsbridge are two of the most exclusive areas of London, laden with embassies and consulates. Due to its proximity to Kensington Palace, this area hasn’t changed much over the centuries. Knightsbridge is home to some of London’s wealthiest inhabitants and has the most exclusive high-end shops. The area is also very important culturally, since it is home to many museums and universities.

Until 1830, this area was a rural village with a market and Victorian townhouses. Holland House is the area’s most famous mansion, and part of its land is now Holland Park. Most of its buildings date from the nineteenth century, and you can currently visit two of its Victorian houses. To the west and north of Kensington Gardens there are two luxury residential areas, where many foreign embassies are located. The shops in this neighbourhood are almost as high-end as those in Knightsbridge.

The main street, Queensway, is bustling and cosmopolitan; full of cafes and restaurants. Its most popular landmarks are: Portobello Market, Notting Hill and Holland Park.

The ancient medieval village, south of Regent's Park, Marylebone, has the largest number of Georgian mansions in the capital. Until the eighteenth century, this area was surrounded by fields and gardens. During the nineteenth century its elegant houses were occupied mainly by doctors, and nowadays it still maintains its medical tradition and charm.

Greenwich is known for giving its name to the Greenwich Meridian and is where the National Maritime Museum is.

A royal palace was built here during the Tudor period, but the only building left standing is the Queen’s House designed by Iñigo Jones for the wife of James I. In Greenwich you’ll find a market, a park, libraries and antique shops. 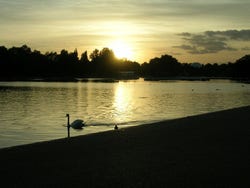 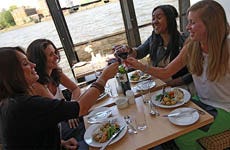 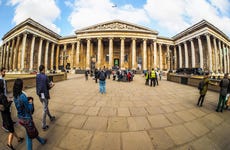