This Harry Potter studio tour is where you can discover the original film sets, special effects, authentic props and costumes from the eight-film series. The ideal place to visit for muggles and witches alike! 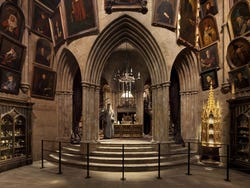 The Warner Bros. London Studio Tour leaves from the city centre every hour. It takes approximately one hour to get to the Studios.

Once you arrive, you have over 3 hours and a half to explore the Studio at your own leisure and discover what makes the eight Harry Potter films so unique and special and what has led them to be among the 50 highest-grossing film series of all times.

During the tour, you’ll discover the Great Hall, explore Dumbledore’s office, see the original props like Harry's Nimbus 2000 and Hagrid’s flying motorcycle, as well as visit the Gryffindor Common Room, the dormitories, Hagrid’s hut, Ollivander's wand shop and the Quidditch store. You’ll also walk through Gringotts Wizarding Bank, sit at the Potions classroom and get a glimpse of Professor Umbridge’s office in the Ministry of Magic.

This behind-the-scenes walking tour also includes the chance to find out how they filmed all the special effects and brought to life the story's various creatures. The Studio also features several interactive exhibitions, where you’ll feel one of the characters.

At the end of the tour, you’ll have time to stop at the souvenir shop and have a snack at the Studio Café. Don’t forget to order a butterbeer!

After having spent an incredible 3-hours in the Warner Bros. Studio, you’ll take the bus back to the heart of London and get off at Victoria Station.

If you want to find everything there is to know about The Making of Harry Potter, you can hire an English audio guide for just £4.95.

If you’ve already bought your ticket to the Warner Bros. Studio, don’t worry! You can just book the travel to the studio. Make sure to book the transport at least two hours before your scheduled time, as not to be late.

Since this tour is so popular, there is a chance that the tickets are all sold out when you book the activity. If this happens, we’ll contact you as soon as possible to offer you an alternative date or we’ll refund you the total amount.

Each bus can only transport one wheelchair.

* The price varies based on the chosen date

Transport to the Warner Bros. Studios in a luxury coach with WiFi.

Book as soon as possible to guarantee availability, especially during public holidays and festivities.

You will receive an email with your ticket attached which you must print out and show on the day of the activity.

If you still have more questions, check out our section on frequently asked questions. If you need help to book an activity or have any enquiries, please contact us.

from
US$ 48.90
No hidden fees or surcharges
Book

A must-do for any Harry Potter fan - or even if you are just a bit interested! Very enjoyable, and excellent "passport" souvenir for free!

Really, we did not have enough time there, merely 3.5 hours isn't enough if you need to eat and want to go to the shop.

Very uncomfortable bus trip- squashed and no leg room. Dumped in carpark, then had to queue twice for entry!! Very frustrating.

The tour itself was incredible! We had a great time seeing how Harry Potter was made. We had one problem with the tour group though because we missed both our busses because we were told to wait in line and then our bus left without us because no one told us that bus was for our time slot. We luckily were able to get on another bus because there was space left over, but it was frustrating to be told that we missed our bus when we were there half an hour early and there was no communication.

I travelled with teenagers
Show all the reviews
like

8.10 / 10 1,025 reviews
Discover London’s oldest and most famous church, where royal weddings and coronations have taken place and historical figures are buried.
US$ 26.90
Book
like

8.40 / 10 11 reviews
Discover the spirit of London on this guided tour. Visit the city’s most famous landmarks, the Changing of the Guard and finally a sightseeing cruise.
US$ 116.10
Book
like

8.40 / 10 339 reviews
Enjoy a day-trip from London to Windsor Castle, the Queen’s favorite Palace, Stonehenge, the world’s most famous prehistoric monument and the Roman city of Bath
US$ 141.80
Book