Embark on a 1.5-hour walking tour and visit the locations where the serial killer Jack the Ripper murdered his victims in 1888. The Whitechapel murders are one of the most famous unsolved cases in London. 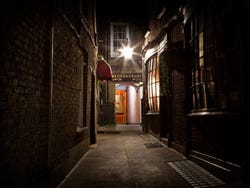 It all began in the early morning of the 31 August 1888, when a man on his way to work stumbled upon a bulge in a dark alley in Whitechapel. Surprised, he approached the object and discovered a prostitute lying in a pool of her own blood.

In the following months, the killer attacked and mutilated another four prostitutes in the Whitechapel area.

Jack the Ripper, also known as the Leather Apron and Whitechapel Murderer is one of the most notorious murder mysteries of London and to this day, Ripperologists are still trying to find out who is responsible for the murders.

Follow your professional guide on a 1.5-hour walking tour of the East End and explore the places where the various crimes took place and learn all about the unsolved case.

The tour comes to an end at around 7:30 pm near Liverpool Street Station.

Anna, the tour guide was super! She made the tour come alive.

Interesting story of Jack the Ripper. All nice alleys to visit

9.10 / 10 1,003 reviews
At The Making of Harry Potter, you can discover the original film sets, special effects, authentic props and costumes from the eight film Harry Potter series.
US$ 55.60
Book
like