The gothic-styled tower standing 315 feet (96 m) high holds a four-faced clock and was built in 1858 at the far end of the Parliament.

The truth about Big Ben

When we envisage Big Ben, we normally think of the Parliament’s clock tower. However, Big Ben is actually the clock’s Great Bell, which weighs 14 tons and is found inside the tower called Elizabeth Tower.

Big Ben’s four-faced clock is set in a 23 feet (7m) frame on all sides of the Tower and was completed in May 1859. It has become one of the most recognisable British icons and its chimes are broadcasted by BBC radio every day.

It is one of the world’s most reliable clocks, withstanding rain, wind and snow. It even kept chiming during the bombing attacks of World War II.

Although there are few occasions when Big Ben has suffered punctuality incidents, Londoners will never forget 1962 New Year’s Eve, when the clock chimed the new year 10 minutes late due to the harsh weather conditions.

However, between 2017 and 2021 the clock fell silent (except for special occasions such as New Year's Eve and Remembrance Sunday) while work was carried out on the clock mechanism itself, ensuring that Big Ben will continue to work smoothly well into the future. 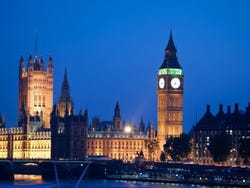 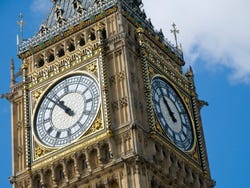 In the Palace of Westminster

No rating yet
US$ 72.30
show all the activities