See this most British of traditions from start to finish with a guided tour, a spectacular ceremony sure to be a highlight on your trip to London. 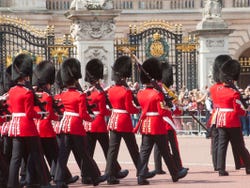 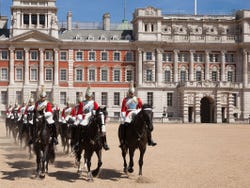 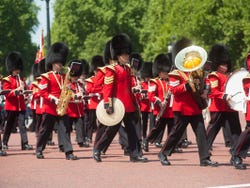 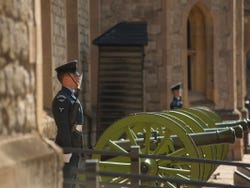 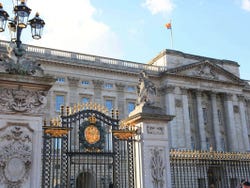 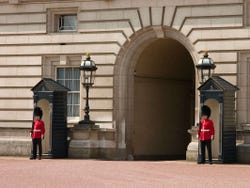 Changing of the Guard at Buckingham Palace

There are a few things that are naturally associated with Britain and Britishness. Afternoon tea, grey skies and the stiff upper lip... and the Changing of the Guard of course! There are few more distinctive sights than the Queen's Guards, whose red uniform and tall bearskin hats are so well known that they've become a symbol of Britain itself.

The Changing of the Guard is the moment, filled with pomp and ceremony, when one shift guarding Buckingham Palace relieves the other. The change includes tightly choreographed marching, with the band of the Grenadier Guards in step, adding a sense of occasion to the ceremony with their bombastic mix of horns and drumming.

And while masses of tourists make the mistake of gathering at the gates of Buckingham Palace, only catching the very end of the ceremony, you'll be accompanied by an expert guide. You'll be taken around the very best viewpoints to see the changing of the guard from start to finish, and will enjoy your guide's commentary: digging into the history and significance of everything from the uniforms to the choreography.

The Changing of the Guard ceremony is subject to change and cancellation by the British authorities - often due to large public events in London's city centre. If the change is affected by wet weather, cancellation is not announced until 11 am. However even when it is cancelled due to bad weather, there will still be a 'wet change' without the band and with less ceremony.

Changing of the Guard

It is compulsory to display a Covid vaccination certificate or a negative PCR or antigen test performed up to 48 hours before the activity. Vaccines and tests must be authorised and recognised in the country of the activity.

Small groups of 15 or fewer.

Headsets when needed to listen to your guide.

You can book up until 9 hours before the activity as long as there are still places. Book now to guarantee your spot.

US$ 24.50
No hidden fees or surcharges
Free cancellation up to 3 days before
Book